Win the BetMobile with Royal Panda

At Mobile Bingo Bonuses we’ve seen some crazy slots promotions over the years but this one from Royal Panda is up there with the best of them, this September you could spin your way to winning the BetMobile, one of the quirkiest cars we’ve seen for a while.

Usually September indicates a cooling down after a summer of fun, as kids go back to school, college or university and your summer holiday slowly slips further into the past, but Royal Panda have found a unique way to rev things up a little with their Win the BetMobile slots promotion.

How to Win the BetMobile 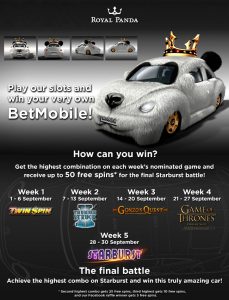 Taking part in this competition really is quite simple, Royal Panda has reach in to their big bag of slots and pulled out a handful of their best for this promo, each week throughout September you will get to play a different slot and the players who get the top three highest scores on that week’s nominated slot will win spins for the Starburst final, when the car will be won.

The slots that have been chosen can be found below, along with the dates they qualify towards the Starburst final;

If you choose to take part you can find out whether you are a lucky finalist every Monday on Facebook, if you spin yourself in to the top three on any of the week’s slots you will receive up to 50 spins for the Starburst final.

Five further bonus spins will also be raffled off among those players who have ‘liked’ Royal Panda on its Facebook page each week, so even if you’re not a hard core slots player you still have a chance to drive away the BetMobile.

You will receive your bonus spins in your account on 28 September. The player who achieves the highest combination with their spins during the Starburst Battle between 28 and 30 September will win the BetMobile!

The BetMobile is a truly one of a kind car that’s definitely going to turn some heads, the car will be professionally customized by a qualified tuner in the winner’s country of residence, to ensure that it is not only one of a kind, but completely road legal as well.