Mobile Bingo Bonuses bring you to a world under the sea, where you’ll be welcomed by Neptune and can swim with dolphins; plus the odd spins. This world is brought to you through a great game called Mermaid Millions Slot from the genius that is Microgaming.

Microgaming the software masters who brought us Jurassic Park, High Society and So Much Sushi introduce this incredibly entertaining high pay out game.

What is Mermaid Millions Slot? 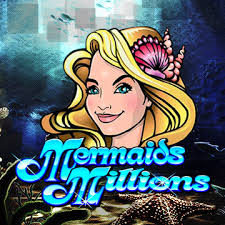 Mermaid Millions is a 5 reel and 15 pay line slot game with an RTP (return to player) of 96.56%. You can bet from as little as 15p and up to £75 meaning you’ll receive both higher pay outs and greater prizes.

It’s obvious that the Mermaid Millions icons would be associated with the sea, including mermaids, a gem stone filled jewellery box, lobsters, seahorses and a clam with a large pearl. The fact that there are multiple pay lines increases your chances of winning and that’s before we tell you about their wild symbols, scatter symbols, a spins bonus game and treasure bonus game.

Wild Symbol – this is symbolised as King Neptune which substitutes all other symbols, except the scatter. Neptune is also a multiplier and if he appears in any winning combinations, the winning amount is multiplied by 3.

Scatter Symbol – this is the mermaid and if you hit three or more, then you can win 10 bonus spins. During these spins any wins will be multiplied by 3, and additional spins can be triggered when the bonus spins are in play.

Bonus Game – This bonus is triggered when you see 3 or more treasure chest symbols, which will activate a second screen. The second screen will reveal a ‘Pick until Pop’ game where you’re given a selection of sunken containers to choose from, and when you keep picking you will reveal a prize amount each time until one picks ‘Pop’.