Mobile Bingo Bonuses brings you Kitty Bingo, which as the name suggests is themed after furry and cute cats. The clear blue background, Kitty Bingo offers a relaxing feeling along with a fun-filled atmosphere. Players joining Kitty Bingo will receive a 300% bonus on their first deposit and up to 100 bonus spins should this first deposit be made within 10 minutes of registration.

At Kitty Bingo, players have the choice of accessing their favorite games via their PC’s and laptops and, since recently, via their mobiles and tablets. Having gone mobile, Kitty Bingo will now be accessible to players whenever and wherever they wish to play.

Players funding their accounts can do so via various cards including Visa, Maestro and Mastercard as well as online wallets such as Neteller and Paypal. Deposits carry no fees and are instantly credited to players’ accounts.

What Games are on Kitty Bingo? 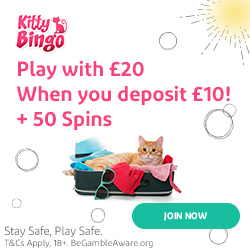 Kitty Bingo offers both 90 and 75 ball games in different rooms with diverse card prices starting as little as 1p.

Found at the online bingo site is the Kitty Cash Progressive Jackpot which can be won in any 90 ball room in 37 calls or less. Recently added are the extra features where players can choose the caller of their choice, Zoom in or out on their cards, a multiplay Tab where players can check on upcoming games and play in different rooms at the same time as well as switch between games they are involved in.

As soon as a game has started players can click ‘Jump to game’ to go directly to the game. Players also have the option to check the last 10 games they had cards for. This will display all the winners’ one after the other.

Complimentary bingo rooms and numerous pre-buy rooms only beneficial to the players are also found in Kitty Bingo lobby. While enjoying bingo games at Kitty Bingo, players can also play on the mini games on the same screen thus they will be able to keep an eye on both. To suit every members taste, Kitty Bingo also has numerous online games ranging from Slots, Roulette, Card Games, Progressive Jackpots and Scratch Cards.

Customers will also have the opportunity to play on some exclusive games which have been created specially for the online casino. Amongst these are the Grease Slot games which carry their own progressive jackpots as well as The Lost Slots of Riches, Lady Luck Deluxe Slots, Jazz Cat Slots, Bubble Time Slots, Cute & Cuddly Slots, Cash Scoop Slots and Santa’s Stash Slots.

We are really pleased that Kitty Bingo have introduced two slot games, Crown of Egypt and a Transformers slot; called Battle for Cybertron. These are two of the most popular games available at the minute, so what do these games involve?

Crown of Egypt Slots is a 5-reel 40-payline online slot machine which offers 1,024 ways to win as well through its exclusive MultiWay Xtra™ feature. As well as the usual Egyptian graphics including the pharaoh and Cleopatra-like consort, Anubis, Horus, Apis and Pyramid, they have introduced a wild symbol represented by the Crown of Egypt logo and the Pyramid is the scatter symbol. The scatter triggers the No Deposit Games with players being awarded 10 spins for 2 scatters, 15 spins for three and 20 spins for four scatters all on this same middle reel.

Crown of Egypt slots is one of those rare slot games which offer players the choice to spin with the regular paylines or to activate the MultiWay Xtra™ feature for added wins, which is why it’s a new winner for us at Mobile Bingo Bonuses.

For those of us who love Transformers the new game is a special treat, it is a 5-reel 40-payline video slot game featuring Optimus Prime, Megatron, Bumblebee and Shockwave. The wild symbol is represented by the All Spark while the Bonus symbol is depicted by the planet Cybertron.

Transformers – Battle for Cybertron Slots comes with 5 Mystery Features which are triggered randomly. The Optimus Prime feature destroys all Decepticon symbols across the reels making way for new symbols to fall and create winning combinations. Similarly Megatron destroys all Autobot symbols. Grimlock burns away random patterns of symbols as does Shockwave while Ratchet appears when there are 2 bonus symbols on the reels to bring in a third bonus symbol and therefore trigger the Spins Bonus.

The Loyalty program at Kitty Bingo is second to none as it has been devised to pamper its players. To start with, players win points whenever playing on the games which they can redeem to play with. 50% Re-Deposit Bonuses, Cashback for life, Special Weekly Bonuses, Birthday Bonuses, Special Weekly Promotions and a special Withdrawal pending period are the benefits that players get.

Kitty Bingo holds a special tab for its hot promotions that runs on a regular basis. Amongst which is the 5K Cash Flash Pre-buy game that plays every last Friday of the month, No Limit Bingo played on a daily, Weekly and Monthly basis, £100 a Day; The Big Dabber features every Saturday with £500 to win. Added to these are Cat’s Pyjamas, £150 Sky Fall, Slot of the Week, TGI Friday, Everyone’s a Winner, Win an iPad, Monday 25% Sale, The Mews at Ten, Boomerang Friday and Pandora’s Mystery Box.