Mobile Bingo Bonuses have some fantastic news about an all new bingo game being launched at Butlers Bingo. It’s not often you get a popular slot game being transferred to its very own bingo game, but that’s exactly what’s happened with the all new Immortal Romance Bingo; which is available online and on mobile.

So, what is Immortal Romance Bingo all about? Below is a detailed description of the game.

Immortal Romance bingo brings the characters of the hit slot game to the 90 ball bingo platform. Each character has their own bingo game with unique special features.

All purchased tickets will fund the jackpot wheel. It contains mini, minor, major and mega jackpots which can be accessed by collecting medallions during a bingo session. 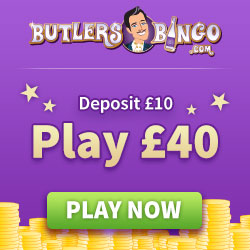 Amber offers the Scatter Ball bonus feature. This is an extra ball that’s called which is not linked to a specific ball number or strip. When this is called each player in the game receives up to two daubs per strip at random.

Troy offers the Vampire Bats bonus feature. Each strip is assigned a special number, which is revealed during the countdown to the game. When this number is called, Troy’s vampire bats are unleashed and three random numbers are daubed.

Michael offers the Wild Desire bonus feature. A special number is called during the countdown to the game, when it is called the wild desire animation is displayed and the column containing this number turns wild for the next five balls called. This increases the player’s chance of winning a full house.

Sarah offers the Wild Vine bonus feature. A special number is revealed during the countdown to the game, once called, up to four numbers are randomly daubed. As this feature only daubs numbers not already called, each player will receive at least one.

In addition to each character special feature another special number may be called, known as a medallion.

Players collect twenty of these to fill their power bar. Once filled, players have a chance to spin the jackpot wheel to win one of the prizes mentioned above.

When a player selects to spin the Jackpot Wheel, they will enter the chamber of wins. They must choose which character to play with. The mini jackpot awards players with 5 spins in Immortal Romance slot game, whereas the other three prizes are fixed cash amounts.