Most of us will be aware of the phenomenon that is Game of Thrones with the iron throne and dragons, it truly is a fantasy feast to the eyes. Well how about if we at Mobile Bingo Bonuses told you that this amazing programme has now become a slot game? Microgaming the team behind impressive blockbuster movie slots such as Jurassic Park, Terminator 2 and The Dark Knight Rises, have released the Game of Thrones Slots and we’re going to tell you all about it.

What is Game of Thrones Slots?

When it comes to the statistical breakdown, Game of Thrones Slots is a 5 reel, 243 pay line non progressive video slot machine, which comes with a wild symbol, scatter symbol, multiplier, bonus game, spins and more. Plus with an RTP (return to player) of 95% you’ll not only be entertained but will also hopefully win a jackpot or two.

As with the other Microgaming slots, they incorporate real video footage from the series to indicate game features. You can also play multiple bonus games, featuring recognisable symbols such as the house flags and the iron throne.

The official Game of Thrones slots was launched in December 2014 and when interviewed Roger Raatgever, CEO of Microgaming, said “We plan on taking all of the features of the small screen fantasy epic to create a masterpiece of a slot. This will be a fantastic addition to our branded content games portfolio. Our operators and their players have 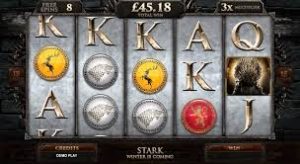 plenty to look forward to this year!”