There are a few sure fire ways to ensure a new slot game is an instant success, one is to base your theme on a blockbuster movie, another is to base it on sports. Football Star Slot from Microgaming obviously falls in to the latter category and was launched to mark the start of the 2014 World Cup in Brazil, but Football Star still remains a popular slot today, which is why we at Mobile Bingo Bonuses had to bring it to you.

With a pay out ratio better than Lionel Messi’s scoring record for Barcelona, you can be sure there will be plenty of chances for a winning result on the Football Star Slot 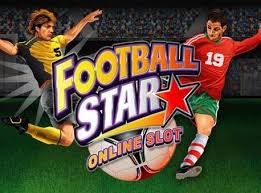 Where to play Football Star Slot;

What is Football Star Slot

Football Star Slots is a 5 reel 243 ways to win slot game based around the most popular sport in the world, with a background screen set in a three tiered stadium including turf and is packed to the rafters with football fanatics, so you can just imagine an electric atmosphere surrounding you as you spin and win, all of the symbols on the reels are also football related.

The game features wilds, striking wild feature and spins with rolling reels, The symbols you can expect to score with include football players, a referee, the stadium, football shirt and football boots.

The Football Star Slot logo represents the wild symbol which can be substituted for all symbols, with the exception of the scatter symbol, when you take in to account there are over 40 symbols on those spinning reels, you can see how this could vastly improve your chances of winning. That without even taking in to account the Striking Wild feature in which the middle three reels randomly turn wild with a guaranteed win. 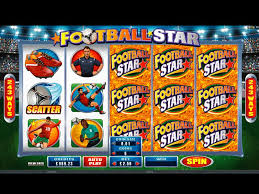 As for the scatter symbol, which is a flying football, this bonus takes affect when 3, 4 or 5 flying footballs appear and this will trigger 15, 20 or 25 spins, during which the Rolling Reels can award multiple consecutive wins and up to 10 times multiplier, with pay outs including £500, £100 or £10 for 5, 4 or 3 such symbols.

Of course exactly how much you stand to win on the Football Star Slot will depend on your initial stake, which for those of you who like to play a little cautiously, can be set from as little as a penny and coin choices are 1 to 5, if your feeling adventurous you can select auto-play where you can choose up to 500 games to spin.

As you would expect from Microgaming, Football Star Slot has excellent graphics and a rock music background with fans cheering, making this a thoroughly enjoyable slot to play, especially with its top notch features and with so many chances for you to win.